The inhabitants of the northeastern region of Thailand are more closely affiliated with Laos.

In Isaan the people speak a dialect of

Speak Thai and think you can outsmart them?

They'll just switch into another language!

They eat different food and dress differently too. 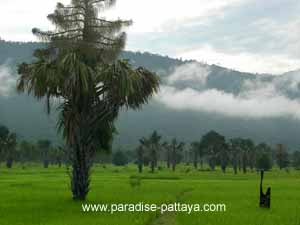 The Lao speaking people of Isaan -who make up the majority of the population in this area - distinguish themselves not only from the people of Laos but also from the central Thai.

They do that by calling themselves 'Khon Isaan'.

Most inhabitants of Isaan are farmers.

Many people from Isaan migrate to Bangkok and areas like Pattaya during dry season to find work, often in the hope of being able to boost their meager incomes and supporting their families back in Isarn.

For a number of girls from Isaan prostitution offers relatively large amounts of money, particularly for those women who are able to work with tourists in Bangkok or Pattaya.

Back-breaking jobs in Isaan such as planting rice may only pay as little as 50 Baht per day and with that in mind it may be easy to understand why some Isaan villages become depopulated and seem to consist only of the old and the very young people.

So What's The Attraction?

Why travel to Isaan? That's probably a question many tour operators ask themselves when trying to come up with a selling point for Isaan Thailand. Isaan has no beaches, ancient ruined cities, hill tribes or many of the tourist attractions many other parts of Thailand has to offer. Isaan is the hottest, driest part of Thailand with the worst soils and the highest levels of poverty.

....the attraction that Isaan Thailand offers are very friendly people who find joy in visitors taking an interest in their region.

Cities in Isaan like Nakhon Ratchasima (Korat), Khon Kaen, Nong Khai and Udon Thani increasingly become popular Thailand retirement regions for retirees and expats from all over the world.

As neighboring Laos is opening its doors to tourism so the attraction of using Isaan (or the Northeast of Thailand) as a stepping stone to Laos is increasing. Travelling around the Northeast is relatively easy.

Most roads in Isaan are paved. During the Vietnam War the Thai government, with the financial help from the U.S Government, built an impressive network of more than 15, 000 km of highway.

The capitol of Laos, Vientiane, was linked to Nong Khai in Isaan in 1994 when the 'Friendship Bridge' was opened in 1994. This was the first bridge across the Mekong linking Vientiane in Laos with Nong Khai in the Northeast of Thailand.

Many tourists and expats in Thailand are visiting Vientiane for their 'Visa Run' from Pattaya, Bangkok, Chiang Mai and other parts of Thailand.

The people of Isaan celebrate many most enjoyable traditional festivals, such as the Bun Bungfai Rocket Festival, the Candle Festival, the Silk Festival in Khon Kaen and the Elephant Round-up in Surin.

Return to TOP of Isaan Thailand