Ladyboys in Pattaya
The Girls Who Were Boys

Get ready to spot ladyboys in Pattaya.  In fact you'll find them also in

• and in other areas in Thailand

It is probably the most mind bending sight for the first time visitor.

In Thai language these "boys who were girls" are called "katoey".

You will usually find Katoeys work in

• beauty salons and as hairstylists

Sometimes you'll be amazed at how many you'll see in your day-to-day life!  In fact you'll even bump into someone who looks like (s)he's in the process of becoming one.  That person is what I call a "ladyboy-in-training".

So how come you'll find katoeys surrounding you?

The Truth Behind Ladyboys...

Katoeys are more accepted in Thailand and its culture than transsexuals or transgenders are in most Western countries. There are several popular

who are katoeys. Thai newspapers may print pictures of the winners of katoey and female beauty contests side by side.

It is a phenomenon and it is not restricted to urban areas alone. There are katoeys in many Thai villages, and katoey beauty contests are commonly held as part of local fairs.

In Pattaya of course you'll find them work in Beers Bars, Agogo Bars, and in other adult oriented entertainment venues. Many Kathoeys also work in entertainment and tourist centers, as dancers, in cabaret shows — Alcazar and Tiffanies in Pattaya are among the most famous.

In North Pattaya you will find two popular transsexual cabarets.

The Alcazar Cabaret and the Tiffany Cabaret 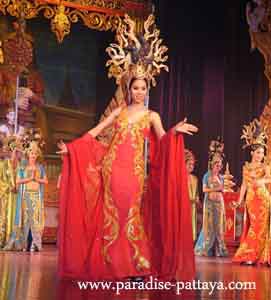 These live Cabaret Shows are a very popular tourist attraction.

If you are lucky you may be able to witness a Katoey beauty contest in either cabaret.

Check out what people think about the Pattaya Ladyboys at the Alcazar if you're contemplating going.

Check Out The Katoeys on Walking Street

In any case be sure to check out Walking Street.  You'll find many of them hanging out on the sidewalk for some 'company'.

You'll be shocked at how gorgeous the Pattaya ladyboys are (even during Songkran).

But don't let their 'female beauty' deceive you.  They are quite physically fit to a guy's level.  One time I remember even seeing a katoey run!  (S)he was wearing high heels and was able to sprint faster than me.  It turned out that (s)he was running from the police for some reason.

Return to TOP of Ladyboys in Pattaya