The History of Scuba Diving

The first thing to know about the history of scuba diving is where the word 'scuba' comes from.

Let's meet one of the men who transformed this form of diving and made it more popular.

The father of scuba diving is the famous Jacques Yves Cousteau.


A little over 65 years ago during the Second World War the French Navy officer 'Jacques Cousteau' designed and built an advanced self-contained breathing equipment.

This was the first of its kind without the need of hoses or any other means of surface air supply.

This is where it all begins...

The beginning of The History of Scuba Diving 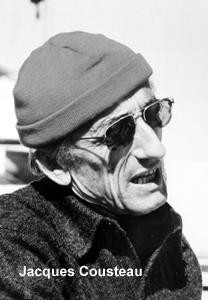 He developed this scuba diving equipment so the French were able to plant underwater mines without the enemy detecting it.

Jacques Cousteau applied what He had learned from the British scientist John Haldane; a diver's air supply has to be delivered at a pressure equal to the pressure of the surrounding water.

Jacques created a breathing apparatus that could deliver compressed air at the equal pressure.

His next accomplishment was to design and built a valve that automatically responded to the diver's breathing.

Not only was the device designed so that it would give air at the right pressure at any given depth, but also to prevent dangerous amounts of carbon dioxide to enter the tank.

In other words the carbon dioxide the diver releases when exhaling was prevented from entering the tank.

He did not finish his development before the end of the War.

After the end of the War Jacques Cousteau led a team of the French Navy to defuse thousands of underwater mines, bombs and torpedoes from
sunken German submarines.

The diving depth was up to 9 meters or 30 feet.

The Undersea Research Group Was Born

The Undersea Research Group as Jacques's Team was called went on developing and researching scuba diving for decades.

The scientific Research and improvement of scuba diving techniques and the equipment was brought to the rest of the world on TV.

The History of Scuba Diving For Everyone To Discover

The filming of the underworld was watched by millions on TV. No one before had seen films of the underwater sea world of such depths at that time. I remember watching the adventures of Jacques and his team on TV as a kid.

The documentaries were called 'The silent world' or Le Monde du Silence in French.

In order to minimize the effect of extreme cold water in greater depth Jacques designed 'the wet suit'.
The suit allows a diver to dive at great depth in extreme cold.
A thin layer of water between the diver's body and the suit heated by the body temperature of the diver's body.
Cousteau died on June 25, 1997. The History of Scuba Diving and what a Legacy indeed.

Diving Pattaya Scuba
Dive with the best trainers in Thailand

Return to The TOP of The History of Scuba Diving