Thailand is such a beautiful country with such a rich culture and friendly people.

It is a shame that Thailand's image in the rest of the world has become known for Pedophiles in the past.

What's worse is that some incidents of foreign adults having sex with under age children have increased in the past decade.

The police are diligent in their effort to prosecute anyone having sex with minors. In fact they are becoming more and more aggressive to finding and imprisoning potential pedophiles.

Being With Underage Girls and Boys is a Serious Crime

Engaging in sex with minors in Thailand is illegal whether it is consensual or nonconsensual. Everyone under the age of 18 is a minor.

If convicted the penalty is from 4 to 20 years imprisonment and hefty fines. The penalties for convictions become more severe the younger the age of the child, with a maximum penalty being life in prison.

Thailand has signed reciprocity agreements with many countries belonging to the United Nations.

These agreements allow for the prosecution of persons caught having sex with girls or boys in Thailand under the age of 18.  They are to be tried for the crimes in the nation where they hold citizenship. 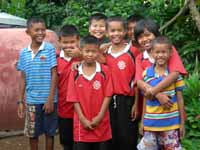 Nowadays children are getting more protection from the police and the international laws.  This is important because they are the future.  Thai kids have the right to not be molested and taken advantage of physically.

So if you ever see someone with a younger child in Thailand and it seems like a potentially 'disturbing' situation - do the right thing.

Return to TOP of Underage Thai